Frozen shoulder (adhesive capsulitis) is a disorder characterized by pain and loss of motion or stiffness in the shoulder. It affects about two percent of the general population. It is more common in women between the ages of 40 years to 70 years old. The causes of frozen shoulder are not fully understood. The process involves thickening and contracture of the capsule surrounding the shoulder joint. A doctor can diagnose frozen shoulder based on the history of the patient’s symptoms and physical examination. X-Rays or MRI (magnetic resonance imaging) studies are sometimes used to rule out other causes of shoulder stiffness and pain, such as rotator cuff tear.

Pain due to frozen shoulder is usually dull or aching. It can be worsened with attempted motion. The pain is usually located over the outer shoulder area and sometimes the upper arm. The hallmark of the disorder is restricted motion or stiffness in the shoulder. The affected individual cannot move the shoulder normally. Motion is also limited when someone else attempts to move the shoulder for the patient. Some physicians have described the normal course of a frozen shoulder as having three stages:

Stage One: In the “freezing” stage, which may last from six weeks to nine months, the patient
develops a slow onset of pain. As the pain worsens, the shoulder loses motion.

Stage Two: The “frozen” stage is marked by a slow improvement in pain, but the stiffness remains. This stage generally lasts four months to nine months.

Stage Three: The final stage is the “thawing”, during which shoulder motion slowly returns toward normal. This generally lasts five months to 26 months.

Frozen shoulder will generally get better on it’s own. However, this takes some time, occasionally up to two to three years. If you have a stiff and painful shoulder, see your physician to make sure no other injuries are present.

Treatment is aimed at pain control and restoration of motion. The first goal is pain control. This can be achieved with anti-inflammatory medications. These include pills taken by mouth, such as ibuprofen or Naprosyn, as well as injections, such as corticosteroids.

To restore motion, physiotherapy is usually started. This may be under the direct supervision of a therapist or via a home program. Therapy includes stretching or range-of-motion exercises for the shoulder. Sometimes heat is used to help decrease pain. Examples of some of the exercises that might be recommended can be seen in figures 1, 2 and 3. 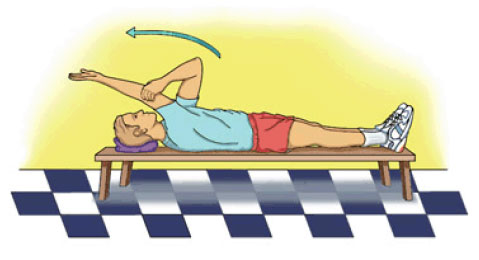 FIGURE 1 – Overhead stretch: Lie on your back with your arms at your sides. Lift one arm straight up over your head. Grab your elbow with your other arm and exert gentle pressure to stretch the arm as far as you can. 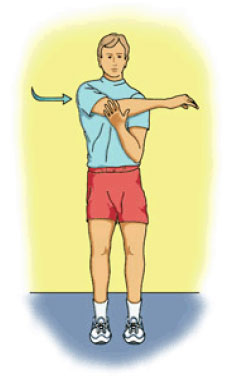 FIGURE 2 – Cross-Body Reach: Stand and lift one arm straight out to the one side. Keeping the arm at the same height, bring it across your body. As it passes the front of your body, grab the elbow with your other arm and exert gentle pressure to stretch the shoulder. 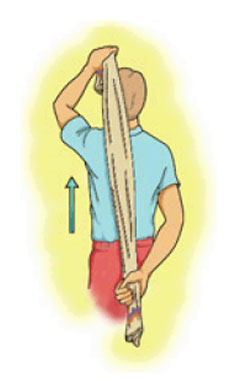 FIGURE 3 – Towel Stretch: Drape a towel over the opposite shoulder, and grab it with your hand behind your back. Gently pull the towel upward with your other hand. You should feel stretch in your shoulder and upper arm.

If these methods fail, nerve blocks are sometimes used to limit pain and allow more aggressive physical therapy. More than 90 percent of patients improve with these relatively simple treatments. Usually, the pain resolves and motion improves. However, in some cases, even after several years the motion does not return completely and a small amount of stiffness remains. In the long run, this small loss of motion does not seem to cause functional limitations.

Surgical intervention is considered when there is no improvement in pain or shoulder motion after an appropriate course of physical therapy and anti-inflammatory medications. When more invasive measures are considered, the patient must always consider that most individuals will get better if given sufficient time and that surgery always has risk involved.

Surgical intervention is aimed at stretching or releasing the contracted joint capsule of the shoulder. The most
common methods include manipulation under anaesthesia and shoulder arthroscopy:

Often, manipulation and arthroscopy are used together in combination to obtain maximum results. Most patients have very good results with these procedures. After surgery, physical therapy is important to maintain the motion that was achieved with surgery. Recovery time varies. Some patients require six weeks to three months off work depending on their occupation and speed of recovery.

Research on the Horizon/What’s New?

Although several theories exist, the cause of frozen shoulder is not known. Further research is needed to determine it’s exact cause. If the cause could be determined, better preventative measures or treatments could be developed. Most patients affected by frozen shoulder do get better with time. Many surgeons have reported the results of various physical therapy regimes as well as surgery. Further research could help determine which treatments work best, or if treatment changes the normal course of the disease.